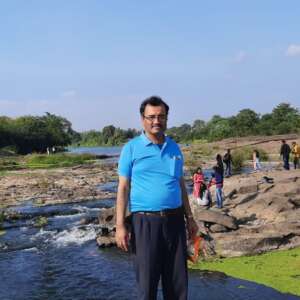 The Importance Of The Sukshma Buddhi, Kathopanishada

While the Sthula buddhi can look at the world only at the surface level, the sukshma buddhi can look at the same at a deeper, subtler level. While the Sthula buddhi is constrained by time and space limits, the sukshma buddhi does not know such boundaries. It can easily wander all over the world and see what is happening with a person or a thing in the remotest corner of the world. It can easily have peeped into the past, present, and future of an individual.

‘Autobiography of a Yogi’ by my guru Paramhamsa Yogananda.

Master had an American disciple called Mr. Dickinson, whom he once gifted a silver cup. On seeing the cup, Mr.Dickinson was taken by surprise. When Master asked him the reason, he told a strange tale- “When I was a child of five years, I was once playing with my brother near a pool. My brother threw me into the pool in a lighter vein. As I did not know swimming, I was about to get drowned. I lost my courage. Then all of a sudden a shaft of light appeared there and a monk was standing in it”.

“He gave me a reassuring smile, which restored my confidence. Then suddenly a friend of the brother bent down the branch of a tree in the pool and with its help, I got out of the pool. The monk disappeared. For years I kept wondering who the monk was. I got the answer in 1893 when I heard the historic speech delivered by Swami Vivekananda at the meet of world religions in Chicago. When I saw Swami Vivekananda, I realized that it was the same monk. After the speech, I met with Swami Vivekananda” and on seeing me, he said, “Young man, I would like you to keep away from water”.

This further convinced me that it was the same person. The thought of having him as a guru crossed my mind. Swami Vivekananda immediately recognized the thought and told me, “No, I am not your guru. You will get your guru later on and he will give you a silver cup”. These words have come true after forty years. I have been really gifted a silver cup by my guru”. It is significant to note that at the time of Swami Vivekananda’s helping the drowning child, the former was in India.

It means that at that time, it was the soul of Swami Vivekananda that traveled all the way from India to America to help the child, while the body remained in India. It is also significant to note that Mr.Dickinsons’s meeting with Swami Vivekananda occurred on the 23rd of September 1893 and my guru was born on the 5th of January of the same year. It means that my guru was just a child of nine months at the time.

Let’s make the intelligence subtler through spiritual sadhana and thereby see the world in a better light.

Origine Story Vedic Devata Stories Will Be Updated Soon, Be patient! Attributes The next energy field in the North-West direction is Roga. This red-colored energy

The Complete Details of Aries Sign/Rashi

Origine Story Vedic Devata Stories Will Be Updated Soon, Be patient! Attributes The red-colored energy field East of Diti, in the North-East direction, is called