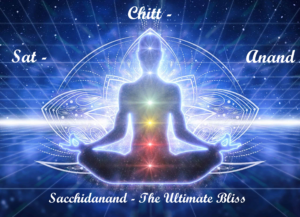 Arjun’s rath (chariot) in the Mahabharat war represents many of the worldly situations. The rath is also a metaphor for mind or consciousness. The five horses are the five senses that drive our minds, namely: hearing, seeing, feeling, tasting, and smelling. We are Arjun, the rider. The Vedas guide us to give the reigns of our chariot (mind) in the hands of Shri Krushna. If we control our senses and thus the mind on our own, we might become materialistic and greedy. However, when we put God in the driving seat, the chariot will take us to our higher self. We will achieve sacchidanand – the ultimate bliss.

God is known as Sacchidanand in our Vedas. The word Sacchidanand consists of three words – Satt (Satya or the ultimate truth), Chitt (the consciousness), and anand (bliss). In this sense, satya or satt is much more than the material truth. It is the universal truth. Humans used to consider the atom as the smallest particle at one point. However, we discovered that atoms are made of smaller particles like neutrons, electrons, and protons. Today we might consider quarks the smallest particles. Our truth changes from time to time, but the universal truth remains constant. This is satt. The eternal truth.

Chitt or the consciousness is also known as manas or vinnana. Chitt is a part of the mind. We use chitt to think and act rationally in the world. When we experience anything via our senses, our mind processes the information to come to a decision. Consciously or unconsciously, it takes into account our past experiences. Chitt consists of all three forms of mind – conscious, subconscious, and unconscious. Channeling the chitt in the right direction can lead a human to a higher level of spirituality. Our next article will show practical ways to direct your thoughts in the right direction.

The literal translation of anand is bliss. As you might have envisaged, anand is much more than material bliss. It is the happiness or joy a human might achieve through spiritualism. Anand or eternal bliss is not something that we can achieve outside; it is something that was inside our consciousness. It is something that we had forgotten when we started following our senses blindly. It is neither momentary nor physical. The purest form of consciousness is achieved only after a human being finds the ultimate truth (satt) through his chitt.

It is said that the actual dukh (suffering) resides in mind. The body itself is incapable of suffering. The biggest example is of the sadhus that perform hath yog. They can walk on fire and sleep on a bed of nails without their body feeling any pain. They can control their chitt from feeling any pain in their bodies. Even medical science believes in the power of the mind. Some patients are given placebos to counter pain and suffering. Such patients actually do not feel the pain when they think they are taking medicines for it. This is an example of how the mind is capable of combatting diseases.

When a person becomes spiritually awake, he knows the ultimate truth of his existence. He will be able to concentrate on the things that are more beneficial to him spiritually than materially. It is then that he will be able to enjoy true bliss. Therefore, we can safely say that if you want to feel absolute bliss or anand, you should have a combination of satt and chitt.

The References in Various Texts

The Hindu texts say that the Atma (soul) merges into Brahma (the ultimate truth) at the end of its journey. The Chandogya Upanishad describes Brahma and Atma in sections 3.14 to 3.18 as luminous – the one that shines inside and outside. Sacchidanand is the accurate description of Brahma. It is the ultimate truth in Hindu philosophy. The unchanging reality. The abode of Atma.

Shri Ram is the sacchidanand who is unborn, vigyanswaroop (the basis of knowledge), the abode of form and force, omnipresent, and pervading (sarvarupa), intact, infinite, complete, perpetually mighty, and God with six opulence.

The ultimate goal of Atma is moksha. But what is moksha? Moksha can be a situation when a soul achieves sacchidanand – the perfect synergy of satt, chitt, and anand. The soul merges into Brahma and loses its existence. It is liberated from the cycle of birth and death. Perhaps, it is absolute bliss – the anand.

Bhallat – The Power Of Abundance

Origine Story Vedic Devata Stories Will Be Updated Soon, Be patient! Attributes The energy field developing in the East of Mukhya in the North direction

Origine Story Vedic Devata Stories Will Be Updated Soon, Be patient! Attributes The blue-colored energy field which develops East of Soma in the North direction