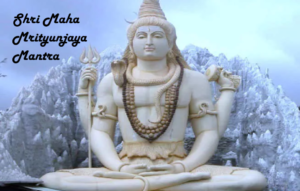 It is well-known that if a person is suffering from either physical, mental, or emotional troubles, he/she should chant Maha Mrityunjaya Mantra to feel better. This mantra also helps a person to achieve moksha. However, we are seldom told about the meaning of the mantra or why it is so powerful. This article is your three-minute guide to understand the Maha Mrityunjaya Mantra better.

The following is the text of Shri Maha Mrityunjaya Mantra:

“We sacriﬁce to Tryambaka the fragrant, increaser of prosperity.
Like a cucumber from its stem, might I be freed from death, not from deathlessness.”

Mrityunjaya Mantra literally means “the mantra to conquer death”. This powerful mantra first appeared in Rig Veda (7.59), and it is also repeated in Yajur Veda. It is chanted in jaap (continuous repetition) or in hom (yagna). The mantra asks Lord Shiva (Tryambakam) to grant moksha to the person either chanting or listening to this mantra. The mantra begs Lord Shiva to free the person from the cycle of birth and death. This is the only way in which a person can conquer death. Perhaps, the main purpose of this mantra is to free a person from fear and uncertainty. The mantra wards of all the negativity surrounding a person and promotes a positive, aligned mind.

The first appearance of Maha Mrityunjaya Mantra is in Rig Veda authored by Vasiṣṭha Maitrāvaruṇi. However, the question arises how did we humans know about this mantra? Well, there is an interesting story about how it was used first.

The story is about a well-known sage Mrukand Muni, who was a great devotee of Lord Shiva. He longed for the birth of a child in his home, but fate would not it. This made him sad and desperate. Being a seer, he knew he was not destined to have a child, but he also knew that nothing was impossible if Lord Shiva granted his wish. So, he did tap (prayed intensely for a long time) to Lord Shiva so that he will give him a son. Lord Shiva is considered Bholenath, the granter of wishes. Lord Shiva granted Mrukand Muni’s wish of a son but with a condition. The sage was ready to accept the condition, and so he was blessed with a son named Markandey.

However, when the sage showed Markandey’s kundli to astrologers, they said the child will only live for 12 years. Knowing his son will die at such a young age made the sage really sad. Again, he knew only Lord Shiva had the power to change the fate; after all, it was him who had blessed the sage with a son. So, he started teaching his son the rituals of praying Lord Shiva. As Markandey grew, his mother started worrying about his approaching death. Markandey started praying Lord Shiva with the Maha Mrityunjaya Mantra and reached a deep state of meditation. When the time came, Yamaduts came to take his soul away. However, they could not go near the child as he was reciting the Maha Mrityunjaya Mantra.

When Yamraj came to know that his servants could not bring the soul of a little child, he proceeded to do the work himself. On seeing Yamraj, Markandey hugged the Shiv Ling with both his hands and continued reciting the mantra. Yamraj tried to force the child away from the Shiv Ling. At this time, the Shiv Ling burst open, and Lord Shiva appeared. He scolded Yamraj about the heinous act. Lord Shiva then granted Markandey longevity, and Yamraj returned without the soul of the kid. This story is an example of how a human can achieve longevity with Shiv Bhakti when he was not even destined to be born.

There are other Shiva Bhakts like Shri Ram, Shri Krushna, Kannapa, and also Ravana who left a mark in this world with their Shiv Bhakti.

In the play Hamlet by William Shakespeare, Hamlet says that human knowledge is limited by saying the phrase, “There are more things in heaven and earth, Horatio, / Than are dreamt of in your philosophy.” Some phenomena and rituals in Hinduism are too deep to put into words; Maha Mrityunjaya Mantra is one such phenomenon. It is not a mere mantra but a whole phenomenon in itself. Don’t believe me? Try it.

Bhallat – The Power Of Abundance

Origine Story Vedic Devata Stories Will Be Updated Soon, Be patient! Attributes The energy field developing in the East of Mukhya in the North direction

Origine Story Vedic Devata Stories Will Be Updated Soon, Be patient! Attributes The yellow-colored energy field next to Shosha, in the North West direction, is

Bhudhar – The Power Of Manifestation

Origine Story Vedic Devata Stories Will Be Updated Soon, Be patient! Attributes The red coppery energy field in the North is bhudhar. Bhudhar is called