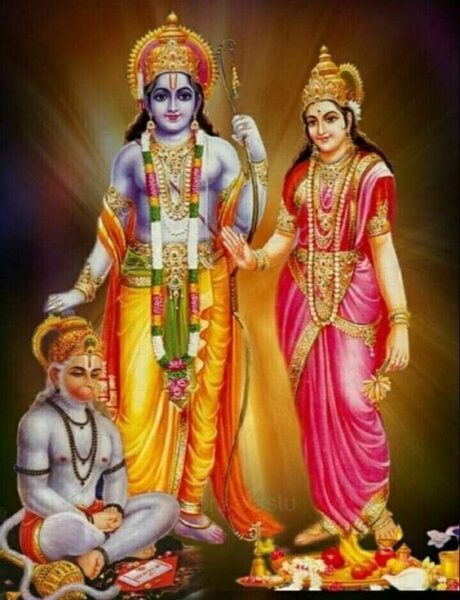 Meaning:
By meditating on “Rama, Rama, Rama”, my Mind gets absorbed in the Divine Consciousness of Rama, which is Transcendental,
The Name of Rama is as Great as the Thousand Names of God (Vishnu Sahasranama-stotra, Uttara-khanda, Padma Purana 72.335).

Goddess Parvati asked Mahadev about the easiest way to recite the name of the Lord. Mahadev replied that even for the pundits, recitation of the name of Lord Ram is as good as reciting the whole Vishnu Sahasranama Stotra. So, what is so divine in the name “Rama” or “Raam” that merely repeating it time and time again can bring you closer to moksha?

The Meaning of Raam

The name Raam exists since the beginning of Hinduism. In Atharva Veda, the word Raam means “dark, dark-colored black” as in “a dark night”, a ratri. In other Vedic texts, the word Raam means “pleasing, delightful, charming, beautiful, lovely”. In a linguistic sense, the word means “stop, stand still, rest, rejoice, be pleased”. The seventh avatar of Lord Vishnu, dark-skinned Sri Raam has all of these qualities and many, many more.

The sixth avatar of Lord Vishnu was called Parashu-ram. The name Raam has its roots so deep that it is extremely difficult to find out the origin. However, the use of the name did not stop with the seventh avatar of our Lord. In fact, with the avatar of Lord Raam, the name became immortal, just like its owner.

Bhavya (grand) history of Bharat is filled with the devotees of Rama. Tulsidas’s Sagun Isth, Kabir’s Rama, Raam Jaap in Shri Guru Granth Sahib, or Gandhi’s “Hai Ram!” there is Raam Naam woven in every inch of the Bharatiya cultural fabric. Lord Rama was born in Ayodhya on the ninth day of the Chaitra mas (lunar month) to King Dashrath and Queen Kaushalya. This day is celebrated as Raam-Navami all over the world. He was given his name by Mahrishi Vashishtha. END_OF_DOCUMENT_TOKEN_TO_BE_REPLACED